What my grandson is teaching “Gramoune” about eating

He calls me ” Gramoune.” In the Creole language this means Gran Human. He makes me discover a new role in education, being concerned, committed but also without any pressure, with full confidence that he will become a good man. Do you know the poem “You will be a man, my son” from Kipling ?

The past is here with me

Oliver is 2,5 years old, he is my son’s son, they live in Singapore. Spending some time with him has given me the opportunity to revisit many aspects of the education I advocated when I was raising my own children. This is a long time ago and yet feels so recent. Our combined family had 4 children. For me, meals were an opportunity to eat and to get together. 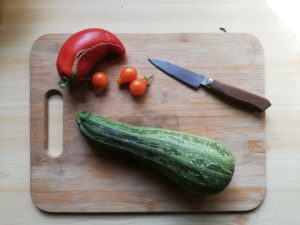 About the content of the plates. Depending on the days, intensity of my work and my level of fatigue, I was more or less able to cook meals I would now defined as healthy and environmentally friendly. Pies, fried rice, pasta with vegetables or noodle soup were often the best option. Cheeses, yoghurts and dessert creams were daily and most of the time industrial.

Today, many years later, I tell myself that I did my best . . . but that I would have liked to do better.  Ha Ha Ha! That little voice of the perfectionist! Do you recognize it? 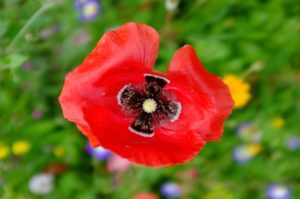 Today, with the benefit of hindsight, I would have rather liked that meals were not the time to focus on reprimand of tidying the house, nor the school work nor the family organization. But it is complex to find other relevant time when by the whole family is together.

To gather the family, I would sometime need to call over several instance each of the family member. This required a lot of energy and could led to nervousness, especially with teenagers in a bad mood. (Oops, that’s a pleonasm.) Should I have let everyone come to the table at his own pace? Everyone eating separately? That would have saved me from getting angry sometimes. What’s your opinion ?

But do not think that there were only moments of tension. No, there have been many lively debates training young minds to reflect and discuss, with respect and humour.

The table, a place where humans meet, between heaven and earth. The table where we eat and talk too. 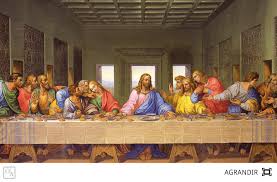 Plato’s Banquet is a good illustration of this. During a meal, each guest in turn comes to give his or her vision of Love. But I’m getting away from our subject.

There were laughter and giggles too.

We also had 2 traditions. One of the children was in charge of providing the small yoghurt pots to everyone by throwing them from the fridge to those who were sitting at the table! About 10 feet away!  Strangely, there was very little failure. Angels excite, that’s proof! The other tradition: at the end of the meal to determine who would wipe the table, the children would do the game Rock – Paper – Scissors.

That was 25 years ago, since then my baby has had a baby.

Oliver spent a week with us in Brittany last spring. He is nice and easy enough for a little man whose limbic brain is barely printed and who is mainly governed by his emotions and reflexes.  Little city dweller from Singapore where it is always between 20 and 40 Celsius degrees.  Here, the Monts d’Arrée, between 5 and 15 degrees, with more cows than humans per square kilometre. He is a little one curious to taste new foods, especially if it’s on my plate.

In giving I receive

Fully available, I took great pleasure devoting time cooking his meals, both varied and attractive. Standing in front of him, he had to reach out to catch his meal, put in pretty little bowls with most of the food separated and offered in small quantities, so as not to panic his little appetite. I noticed how I was always ready and delighted to serve him again every time he asked for “More, More” by handing me one of the bowls. I even got a little pride, “Ha, he loves what I cook for him with love.” Is it still a joke about my ego or the trace of an atavism? 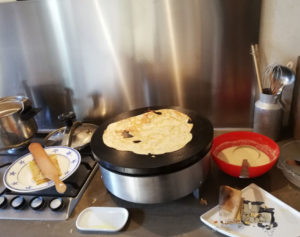 “No more”, waving his little hand forward. I never asked him to finish his plate. Something I sometimes did in the past with my own children. “You’re not going to let ME this? ‘ . . .  What is behind this sentence?

That week, Oliver and I shelled some peas. He was very surprised to find on his plate what he had mistaken for toys!  What a laugh when we make moustaches with the peasl!

It will be a few years before telling him how bees make honey,

for the moment only sweet discovery counts! But after a few finger lap of honey, Oliver stopped suddenly, to go back to other activities.

At some other times, after a long walk or after a bath at the end of the day, Oliver would come to see me in the kitchen with slight tremors. In his eyes, I saw agitation, a certain suffering, impatience, almost distress. His mind remained hermetic to all proposals except EATING. Hunger in the stomach and cells for sure.

How do we feed the little ones? 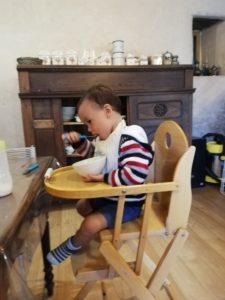 And then, one evening while he was having dinner alone, he called out to me “Hand Bol”, proudly saying it and showed me how he had his left hand under his bowl, pressed against his chest. He held his bowl firmly against him and ate with his fork without too much food dropping. Surely he learned this at the Singapore school. It’s much easier than eating from a plate. The bowl almost under the mouth recovers what falls. The child is focused on what he is doing.

Let us observe how when an adult feeds a child this age, by the third bite, the child’s attention is often lost elsewhere.

Is it because we are afraid that the child is not eating enough the reason why we take the spoon? Is it our impatience?

Perhaps grandparents, with more patience and the hindsight of having already raised a “brood”, can more easily have this confidence in this little man, already full of resources and so close to the wisdom of his body.

And these different questions lead me to think that one day I may have to feed a parent? What precaution should I take?

And a little later still, maybe I’ll be the one who will be spoon-fed.  What will be a respectful attitude for me?