How I eat is how I do life

I was out to dinner one evening with friends when the conversation turned to politics. Many a good meal has been spoiled by this turn of topics. I even know of one meal in a 4-star restaurant that ended in a food fight. No dessert for those folks, just their coats and an escort to the door!

As the discussion at our table heated up, I twirled my spaghetti faster and faster around my fork. I pushed the forked and coiled noodles down on the slippery spoon I was using to capture escaping strands. I was particularly irritated with a single strand of pasta that refused to stay looped on my fork. I kept glancing from my fork to the talking-chewing mouths around the table, looking for a moment to interject my brilliant arm-chair analysis. 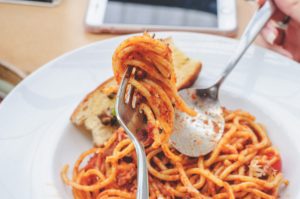 Photo by Keri liwi on Unsplash

But that opening seemed as impossible as corralling the stubborn pasta strand. At last precariously balanced, I hastily headed the wobbling forkful in the general direction of my mouth, eagerly depositing it there so I could add my two cents to the debate. But that saucy, slippery noodle flung itself loose whiplashing the underside of my chin. Then it lobbed itself upward – high enough that I tried to inhale it, unsuccessfully. Bits of sauce freckled my chin and nose.

In the confusion of a pasta strand on the loose, I dropped my spoon and a splat of spaghetti sauce the size of an antique brooch immediately adorned my white blouse.

My first mumbled reaction had only one syllable.

Then my Inner Critic commented, “What were you thinking wearing white to an Italian restaurant?”

Dabbing at the spot did nothing but spread the misery around.

I put my fork down. I put both hands in my lap. I sat back and took a breath. Food spotting was a familiar scene. 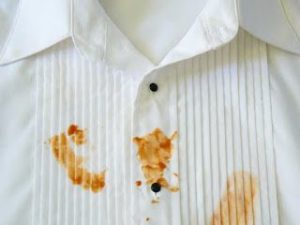 There was a time in my life when every t-shirt, blouse and some slacks I owned had spots on them. Not because I bought clothes with polka dots, but because I couldn’t seem to get food into my mouth without drips and drabs missing the mark.

I always needed 2 paper napkins which ended up being crumpled and soiled wads shoved under the edge of my plate or in a pocket, while fellow diners’ napkins remained untouched. By the end of a meal, a cloth napkin in my hands looked like it had been used to wipe stove, sink and the kitchen floor.

It seemed I lost consciousness during the process of getting the food on my fork and placing it in my mouth. It was embarrassing. And I was angry with myself for being such a slob. I thought about it a lot and repeatedly vowed not to do it, but my wardrobe didn’t look any less spotty.

It was a year after I started meditating that I got a glimpse of what was going on. I began to notice that how I ate was how I did everything in my life.

I began to see that nowhere in my life was I fully invested or fully present to what was going on. I was always on to the next thing, fantasy or taste. There was no real connection to anything or anyone. I didn’t stay focused long enough to be intimate with a friend, a food or a sunset.

Learning to eat more mindfully taught me how to feel more nourished and satisfied emotionally in many areas of my life, not just when I was eating.

And a lot fewer spots and splats on clothes and life.

Have you noticed if how you eat, mirrors how you live your life?